Wrong turns, doubts and carrying on . . . 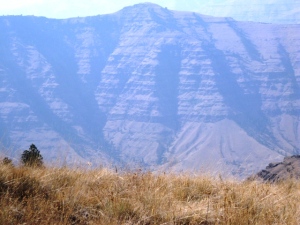 I’ve discovered  “God’s Country”  and it is Eastern Oregon!

This next phase of my walkabout took me on one gigantic roller coaster ride through the very heart of Oregon – from its lower southwest corner to its upper northeast corner.  My world became one massive rolling golden mountain after another. Up each pass, around each bend and deep into each ravine I discovered new, larger than life, delights.

Until now I had favored the Oregon coast and its inland cities.

I had no idea that this “Other Oregon” even existed.

My destination was the Imnaha Writer’s Retreat situated along the graceful Imnaha River. Before setting out, I had a chance to talk to western writer, Rick Steber, who suggested the following route: Bend, Prineville, Mitchell, Spray, Monument, Long Creek, Ukiah, La Grande, Joseph, and finally Imnaha –promising names for towns no doubt rich in history.

For seven hours my trusty little Nissan Sentra and I chewed up the miles and for 90% of that time I was the only car on the road.

Near the end of my journey I was flying high. I imagined myself the supremely successful, super competent “Walkabout Woman.”

That was until I made a wrong turn.

I had done so well on this whole convoluted back road trip and I got cocky. I blithely sailed through the tiny town of Imnaha, 12 miles from my destination, and without a second thought, I turned down the wrong gravel road.

This wrong road had all the trappings of the right road at the beginning, but after about 4 miles into a rather bouncy steep climb, the road turned treacherously narrow, steep,rocky, and pitted. I was barely hugging the mountainside with a shear endlessly deep drop off to one side.  Ready to admit defeat and turn back I could only go  forward. Panic doesn’t come close to describing what I felt. Skidding or sliding off this road would mean sure and instant death.

I white knuckled it through for what seemed like forever before the road flattened and moved away from the cliff’s edge.  The only vehicle I had seen all day – a huge big-wheeled pickup truck full of hunters — stopped and told me that this was not the Imnaha River Road (duh!) I am sure they thought I was an idiot.

The good part of the wrong road!

I eventually found a place to turn around, put my car in low gear (for the first time ever) and crept back down to Imnaha, all the while trying to reframe the whole thing into something else:  An exciting adventure?  A fortuitous chance to take in the views?  A story for my blog?

If nothing else . . . another fucking opportunity for growth?

It didn’t work. This was a low point which shook my courage, changed everything and cut me down to size. I began to doubt my intuition powered walkabout and the wisdom of searching for something unknown that  may not have a happy ending.

I also came face to face with the potential consequences of human error when out of my element. Fatal errors of judgment and unplanned accidents are very un-pretty and un-inspiring. I felt old, tired and vulnerable. All my glorious walkabout plans aside, that day at least, I felt like I had pushed my edge too  far.

I was ready to throw in the towel and go home.

But then I remembered I didn’t have a home, so I did what human beings do – I carried on.

And fortunately the writers retreat turned out to be an oasis – a green moist piece of heaven with kind people.   My little room is on the second floor of the lodge. From this haven the gentle Imnaha River plays  its water music right outside my window. I have peace and quiet and can create uninterrupted for eight hours a day.

I’ve been told that the river I saw below me on my frightening adventure was actually the mighty Snake River and that I had been hanging over Hell’s Canyon. That fit – I had been to hell and back.

We can’t stop the trajectory of our path, but it is just another reminder that following your heart and living intuitively is no guarantee that all will be easy, safe and just.

My subconscious is taking me metaphorically up an unsafe road just like the one I came down.

The best I can say about my life at this point is that it is not boring.

Oh and another thing — my trusty Sentra is now an honorary Four Wheel Drive. 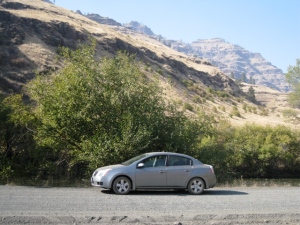 From: Betsy Lewis
← Finding my voice through art
White noise and the winters of life →
11 Comments Post a comment