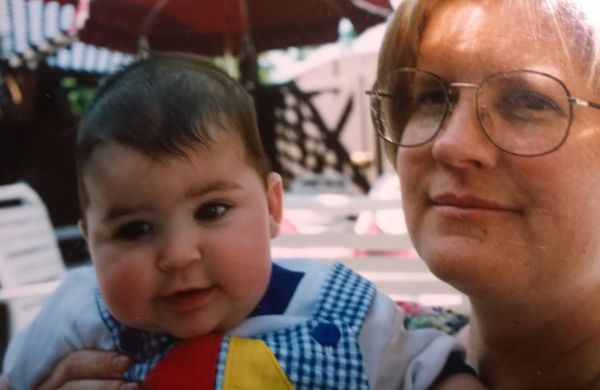 I am embarrassed to say I shopped at Walmart the other day. I don’t support their policies toward the human beings in their employ, but there it was and I needed something in a hurry, so I stopped in.

I have stereotypes about Walmart shoppers. Facebook does a good job of reinforcing them. And sure enough, in the checkout line I was behind a large woman in too tight stretch pants and a spaghetti strap tank top (buying cheap stuff – just as I was.) She had the words “Baby Kai” tattooed on her shoulder blade. I have a son, Kai, now 20, and when he was a baby we called him “Baby Kai”. I normally wouldn’t comment on a tattoo, but I couldn’t help myself.

I told her about my Kai and asked her how old her Kai was. She hesitated and then said her baby Kai had never been born. I told her I was sorry and apologized for asking. Her cheeks got pink and then she rushed to say she had had two healthy children and another was on the way.

The line was slow and long. We began to talk. I told her about my losses. She said that there were things you never got over. I told her that was true, but that it seemed with time, it got easier to bear. She was sweet, thoughtful and soft spoken. She spoke with her eyes and had a beautiful smile. I have no idea how old she was, but we were two mothers, and in a very short time we had bonded — in the Walmart checkout line, no less. We exchanged a long soulful look when we parted.

What a wonderful thing to have happened to me in many ways.

Tags: Walmart
From: Coping, Family, Loss, Love, Parenting
← Girl Meets Boy
The things that come in the middle of the night →
No comments yet